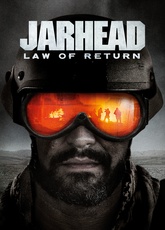 A squad of elite soldiers, led by Gunnery Sergeant Dave Torres, risk their own lives to save an ally they've never met.

Major Ronan Jackson (Devon Sawa), an accomplished fighter pilot for the Israel Defense Forces and son of a U.S. Senator (Robert Patrick), is shot down while flying through Syrian airspace. After miraculously surviving the crash, Jackson is taken captive by a group of Hezbollah militiamen. A gripping and powerful story packed with hard-hitting action, Jarhead: Law of Return follows a squad of elite soldiers, led by Gunnery Sergeant Dave Torres (Amaury Nolasco), as they risk their own lives in the hopes of saving an ally they've never met.